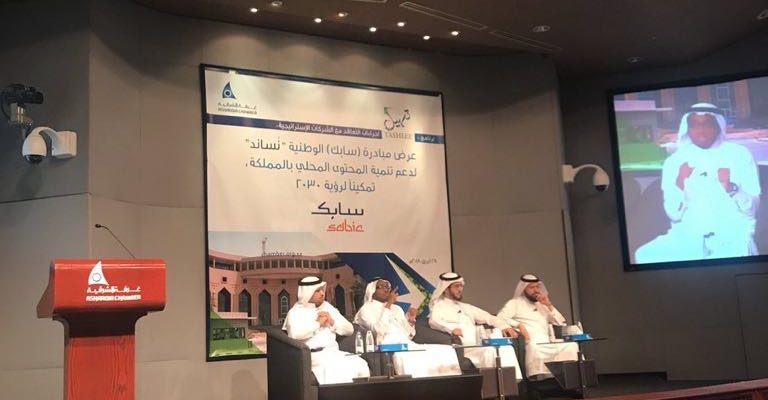 SABIC has more than 40,000 employees worldwide and operates in more than 50 countries. Fostering innovation and a spirit of ingenuity, we have about 11,000 global patent filings, and have significant research resources with innovation hubs in five key geographies – USA, Europe, Middle East, North East Asia and South East Asia.

Asharqia Chamber launched the third session of the program by the end of April.

The Chairman of the Board of Directors of Asharqia Chamber, Mr. Abdul Hakim Al-Khalidi, announced the readiness of the Chamber to launch its third session of the facilitation program (Tasheel), hosted by SABIC on Sunday, April 29, 2018.

On April 2017, Asharqia Chamber launched Tasheel program to support the business sector in the Eastern Province by coordinating and combining this sector with the major strategic companies in the Kingdom in order to identify the products of these companies and to market their investment opportunities, which would enrich the Eastern Region with more production and operation opportunities for national forces.

Al Khalidi said that the current session of the program will show the role and efforts of SABIC in the localization of industries and services, a comprehensive presentation on the investment opportunities available to it, as well as a special registration hall, which includes a suite of suites that allow business and local investors to record their data as potential suppliers. In addition, direct meetings would be hold between businessmen and officials in charge from SABIC to provide consultations and facilitate the procedures of contracting. He stressed the importance of the program as it comes in line with the vision of the Kingdom of 2030, which aims to increase the dependence on the local component, the settlement of supporting industries, and achieving balanced development.

AlKhalidi explained that the hosting of the Saudi Basic Industries Corporation (SABIC), the largest non-oil industrial company in the Middle East, and one of the top 10 petrochemical companies in the world, is a strong support for investment in the region and is in line with national plans of localization of both industries and national capital.

Alkhaldi emphasized, “”Asharqia Chamber will always strive to provide excellent services that meet the expectations of the business sector.” He also pointed out that the program had contributed significantly after hosting Saudi Aramco and Saudi Electricity Company in its first and second sessions, which enrich the investment movement in the region.

He wished that the contribution of the third session-by hosting Saudi Basic Industries Corporation (SABIC)- were going to activate the economic movement in the region through increasing investment opportunities among local manufacturers and suppliers.

About the Author: admin